Do you suffer from Irritable Bowel Syndrome – a common health condition that impacts one in eight people at any time? Here, we’ll share the signs and symptoms of IBS, the causes, and what to do if Small Intestine Bacterial Overgrowth (SIBO) is the culprit behind your gut health issues.

Signs and symptoms of IBS

Here are the common symptoms of IBS.

IBS is a chronic disorder, with symptoms that can disappear and reappear over years. Whilst conventional doctors aren’t sure what causes IBS, the following problems are seen to play a part.

Causes of IBS include:

While IBS is considered one of the hardest-to-treat conditions, don’t lose hope. Our naturopaths are all experienced with treating gut health issues – be it related to food intolerances, bacterial imbalances, and more.

How to diagnose and treat SIBO

Given the significant link between IBS and SIBO, it is worthwhile testing to see if SIBO is the cause of your gut issues. This can be easily identified through a simple breath test and effectively treated with a natural treatment protocol.

The SIBO breath test involves drinking a lactulose solution and then breathing into a collection tube every 20 minutes for at least 2 hours. The tubes are then sent to a lab to be assessed. If you have SIBO, the bacteria will ferment the lactulose solution into hydrogen or methane.

Here are two cases – one related to constipation and the other to diarrhoea – where we were able to identify and treat SIBO, naturally.

Mike gave up his corporate life to become an athlete and coach. He was used to being fit and competing in iron man races with record-breaking swims. When his performance began to drop significantly due to painful abdominal bloating and constipation, he was distraught. He experienced debilitating muscle pain after training and became increasingly tired and moody. He also found his weight would fluctuate from 77kg up to 83kg every couple of days, not due to dietary changes.

Given his symptoms I suggested Mike take the SIBO breath test. His report showed a significant amount of methane gas in his system, confirming he had SIBO. 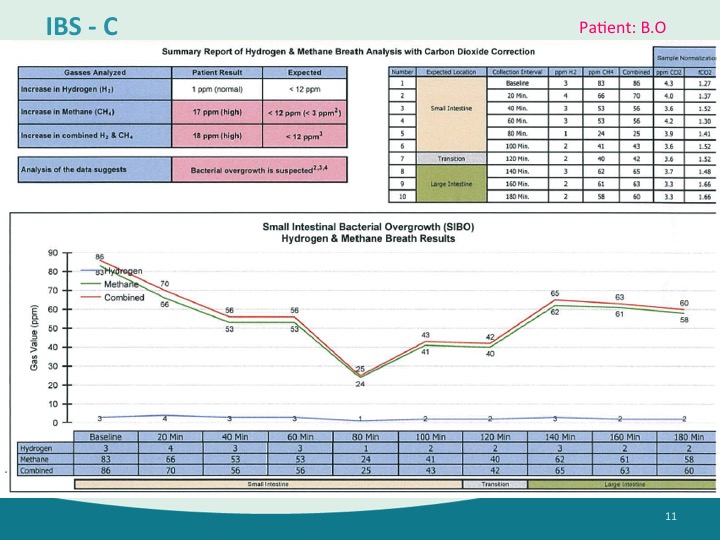 The green line indicates high levels of Methane – a by-product of the digestive process produced by Archaea, the hardest infection to eliminate with conventional antibiotics.

Given Mike’s challenges, he was also keen to do a stool test to gather all necessary data on his gut infection, including virus, bacteria, Candida, and parasites. The G.I.MAP test also finds any intestinal inflammation, “leaky gut”, gluten intolerance and digestive enzyme deficiencies.

Based on Mike’s clinical symptoms, the SIBO breath test, and stool test results, I prepared a personalised treatment plan for him. Depending on a client’s symptoms and results, herbal treatment might include multiple natural antimicrobial agents, antibiotics and anti-biofilm agents such as thyme oil, oregano oil and garlic oil.

After six weeks of herbal treatment, Mike’s weight returned to within 1-2 kilograms of his optimal goal, his muscle pains disappeared and his mood significantly improved.. Mike’s performance returned to form and training was a pleasure again.

For over five years, Michelle, an advertising executive, suffered from a simpler and more common case of IBS. Her symptoms included bloating that, she said, made her look pregnant, and diarrhoea that would have her running to the bathroom after a meal. 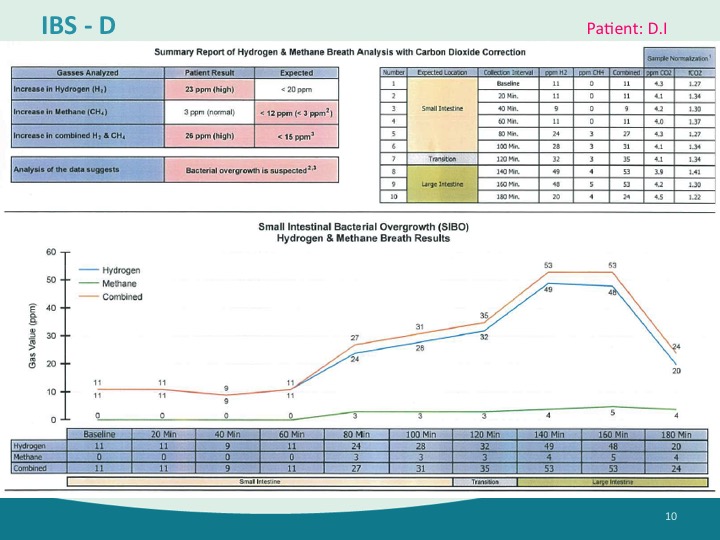 Michelle’s SIBO test results showed high hydrogen gas production; an easier-to-treat form of bacterial infection in her gut. If you have diarrhoea related SIBO, you are very likely suffering from an overgrowth of hydrogen-producing bacteria in your small intestine, as we saw in Michelle’s case.

Within just three weeks of taking the prescribed herbal anti-microbial treatments and probiotics, Michelle’s symptoms had disappeared and she shared she looked and felt great.

With appropriate testing in functional medicine and treatment in naturopathic medicine, we can be confident of tackling the causes – usually the infections – at the root of your IBS. Once the infection has been cured and the good gut flora replaced, many symptoms and food intolerances disappear and most people find their overall health rebounds.

If you’d like to test for and treat SIBO, please reach out. You can schedule an in-person, phone or video appointment with me by calling +852 2523 7121 or connecting here. 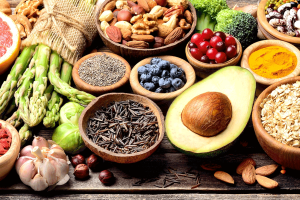 Can nutritional therapy help you achieve your health goals? 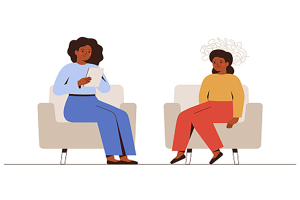 6 Signs When Psychotherapy is Calling for You